The waste of olive oil production contains components, such as oil and phenolic compounds that hinder the natural process of biodegradation. That's why this waste material is considered harmful to the environment. Bio Agro Oliva production method overcomes this problem by deploying first a detoxification process followed by controlled composting. During composting, all waste material of olive oil mills is consumed producing the Bio Agro Oliva organic fertilizer.

During the first stage, olive pomace and leaves are mixed together with waste water. The temperature of the mixture rises to 40°C with the presence of fungi and bacteria. This stage lasts for 2-3 days. Next, composting enters the stage where the main part of biodegradation takes place and organic substances are stabilized (40–70°C). The existing microorganisms are replaced by thermophilic bacteria, actinomycetes and fungi. Target temperature is obtained with frequent turning and aeration of the material, as well as through the addition of new quantities of oil mill waste water (amurca). During the thermophilic stage, the material is sterilized from possible pathogens. The duration of the thermophilic stage is about 45-55 days.

The last stage, the maturation, is characterized by the reduction of microbial action and the drop of the temperature. During maturation, pH is stabilized and humic acids are formed. Turning and aeration of the material are continued during maturation stage, but are less frequent. Maturation time of this compost is 60-90 days. After this time, it is ready to be used on crops.

Completion of the maturation stage is monitored by various laboratory analyses in order to obtain optimal properties and stable quality of the final Bio Agro Oliva product.

Target temperature is obtained with frequent turning and aeration of the material, as well as through the addition of new quantities of olive oil mill waste water 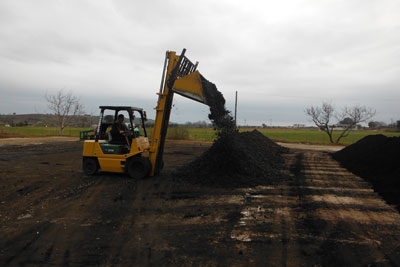